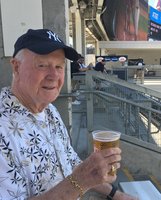 Born in New York, New York, Bill lived in Naples, FL before residing in Bethlehem, Pennsylvania and then to Morris Plains, New Jersey, where he has lived for the past 8 months.

Before Bill's retirement in 1995, he was an Assistant Superintendent for Business for the North Rockland Central School District. Prior to that, Bill entered the order of the De La Salle Christian Brothers in Barrytown, New York in 1947, where he attended High School. He received his Habit in 1952 and his name was Brother Adrian William. He graduated from Catholic University with a degree in Chemistry and went on to receive his Masters in Chemistry. He taught Chemistry in Christian Brothers’ High Schools before joining a facility at Lincoln Hall, a residential school for boys placed there by the courts. He left the Brothers in 1968, and met his beloved wife, Colleen, and they married 6 months later. They had a blessed marriage for 50 years.

A Memorial Mass will be held for Bill on Friday, November 8, 2019 at 10 am at St. Virgil's Church, 250 Speedwell Avenue, Morris Plains. Inurnment of ashes is private to family at a later date. In lieu of flowers, donations can be made to Grace Hospice, 105 Fieldcrest Avenue, Suite 402, Edison, NJ 08837, or online at  https://www.gracehcs.com/donation-program/

Arrangements are under the care of Dangler Funeral Home, Morris Plains.