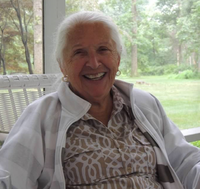 **DUE TO THE CORONAVIRUS, THE KOEPFF FAMILY IS CONCERNED ABOUT THE HEALTH AND WELFARE OF THEIR FAMILY AND FRIENDS. THEREFORE, THEY WOULD LIKE TO POSTPONE ALL SERVICES FOR THEIR MOTHER UNTIL A LATER DATE. PLEASE CHECK BACK IN THE NEXT FEW WEEKS FOR UPDATES.** -------------------------------------------------------------------------------------------------------------- It is with great sadness that the family of MARIA KOEPFF announces her passing after a brief illness on Thursday, March 12, 2020 at the age of 103. Her final days were surrounded by family and friends. Maria, affectionately known as “Oma” will be lovingly remembered by 3 generations of family – her three children: daughter, Elizabeth “Susi” Stollenmaier (Koepff) and her husband Don Stollenmaier, son, Paul Koepff and his wife Julie Koepff and daughter, Monica Koepff; her grandchildren Karen Powers (Holzberger) and her husband TJ Powers, Peter Koepff and his wife Natalie Koepff, Christine Mertz (Koepff) and her husband Aj Mertz, Lauren Koepff and Katherine Koepff and by her three great grandchildren: Caroline Powers, Christina Powers and Ryan Mertz. Maria was pre-deceased by her husband Werner Koepff and her brother, George Meyer. Maria was born in Stuttgart, Germany at the onset of World War I, but grew up in a small village in the foothills of the Alps. She emigrated to the US in 1928 with her father, mother and brother. Later Maria attended Barnard College, then married her husband Werner and raised her family in Morris Plains, NJ. She has been a resident of Morris Plains and Morris Township for over 80 years. Maria was a woman of many accomplishments. She was a liaison and translator between American capsule manufacturer, R.P. Scherer and the Deutsche Gelita Fabriken – our family gelatin manufacturing company in Germany. Through Heinrich Koepff and Robert Scherer, this venture was the first American subsidiary to be established in Germany after World War II. She was a successful businesswoman in DGF, Inc. USA – first as Vice President and later after her husband Werner’s passing, as President. She was an early member of the Master Works Chorus, a Girl Scout leader, an accomplished seamstress and talented in all the sewing arts. She had a passion for gardening and became a master gardener as well as a gourmet cook and baker, all of which, she passed to her children and her grandchildren. Maria was an amazing multi-faceted woman who was an inspiration to her family and to all those who knew her. At the same time, she was a loving wife, mother, grandmother and great grandmother. Maria will be greatly missed by her family and friends. Visitation and Funeral Services will be held at a later date. In lieu of flowers, the family of Maria Koepff request that you donate to the https://www.diabetes.org/nj or a charity of your choice.