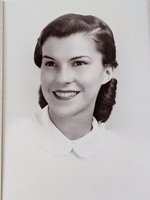 Jeanne Hélène McKee Murdock of Madison NJ passed away peacefully on May 11th at her home with family by her side. Jeanne was born December 26, 1926, in Paris, France. Jeanne’s father, George H. McKee, was a doctoral student at the University of Grenoble, France when he met her mother Mathilde (Marcelle) Mainguy McKee. Jeanne was their only child. In 1927, the young family moved to Atlanta, GA, home of her father. During her elementary school years, Jeanne and her parents lived in Towson, MD. Her high school years were spent in Trenton, NJ, where her father was a Professor and Head of the Romance Languages Department at nearby Rider College. Jeanne graduated from Douglass College in 1948. It was on the Rutgers University campus that she met her future husband, John (Jack) L. Murdock. In 1950, the young family settled in the Madison/Florham Park area. It was there they raised their four children and she lived for the next seventy years. While a busy mom, Jeanne returned to her studies and received her MA degree in Education at Seton Hall University. She taught French for many years at Summit High School. Her French family and heritage were very important to her; she enjoyed visits from cousins and maintaining family ties. After retirement, she and Jack travelled extensively in Europe and the Caribbean. Jeanne and Jack had a wide circle of acquaintances. They were avid bridge players with friends and with the St. Vincent's Church round robin bridge group. During summer months they enjoyed the shore with family and friends at their home on Long Beach Island. Active members of the Surf City Yacht Club, they found that sailing, socializing, and beach time with grandkids made for a great summer. Jeanne was very active in her local community. She taught bridge and Mahjong at both the Chatham and Madison Senior Centers. Books and reading brought her great pleasure and she often attended events at the Madison Public Library. She looked forward to lunch with the ladies of her French conversation group. She participated in many programs at the Thursday Morning Club, and she helped each year with the AAUW book sale. Her liveliness and energy were notable; for many years she was the driver helping others stay engaged and active. Jeanne was preceded in death by her husband Jack. She is survived by her four loving children, John (Ethelyn) of Long Beach, MS, Bill (Karen) of Lancaster, PA, Laurie Felber of Woodstock, NY, and Mary Rohrer (Dan) of Fredericksburg, TX, and six grandchildren. The funeral will be private. A memorial service will be held at a later date. In lieu of flowers, please send donations in her name to either: • The Thursday Morning Club, 25 Cook Ave. Madison, NJ 07945 https://thursdaymorningclub.org/donate/ . • AAUW Madison Branch, PO Box 935, Madison, NJ 07945. Write checks to “AAUW Madison Branch” and in the memo line: ”In memory of Jeanne Murdock- Project Account” Arrangements are under the care of Burroughs, Kohr & Dangler Funeral Home, Madison.