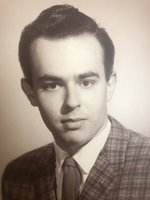 Richard Marshall Goldstein of Morristown, NJ died peacefully after a long illness on July 10, 2020. He was 78 years old. ​Rich was born on August 31, 1941 in St. Louis, MO. He received his undergraduate, master’s, and doctorate degrees in science from Washington University. Rich’s professional accomplishments spanned nearly forty years. He began his long career at AT&T Bell Laboratories in Murray Hill, NJ. In 1981, Rich and a fellow Bell Labs employee were awarded a United States Patent. Following a promotion, Rich became Department Head of Bell Labs’ Design Process Planning and, later, was promoted to Engineering Vice President. Rich’s final years of employment were with Lucent Technologies and Cadence Design Systems, holding positions of Engineering Vice President and Group Director of Marketing Operations, respectively. He retired in 2002. ​Outside of work, Rich was a man with many interests. He loved classical music and was a very talented pianist. He also had a lifelong interest in baseball and was a huge fan of the St. Louis Cardinals. Among his favorite places to vacation was Cape Cod, MA. But above all else, Rich was a devoted husband, father, and grandfather. ​Rich is survived by his beloved wife of 46 years, Susan, his two grown sons, David and Thomas, and his cherished granddaughters, Lila and Jocelyn. ​Funeral services are private at this time, and a celebration of Rich’s life will be held at a future date. In lieu of flowers, donations may be made to the Community FoodBank of New Jersey online at https://cfbnj.org/ Arrangements are under the care of Dangler Funeral Home, Morris Plains.