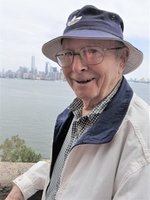 Roger Mason Tirrell, Sr. passed away peacefully October 4, 2020 at CareOne of Morristown from Renal Failure and Heart Disease. He was 90 years old. Roger's passion was carpentry, having his own business since the 1950s. Never needing to advertise, his attention to detail and high quality work spoke for itself. He was a true master at his craft. He loved bowling and has had close to 70 years in the Morris County Bowling Association and was State Representative for Morris County for about 30 years. He was President of the Morris County Bowling Association (MCBA), and inducted into the Hall of Fame for Meritorious Service in 1990. Roger was the longest original living member who helped establish the Morris County Bowling Association. MCBA thanks Roger for the decades of support to the Association and the bowling community, his many years of dedication to promote and sustain the integrity of the sport of bowling. As Charlie Treadway said, "We all miss Peggy yelling out ‘That's my Honeybun’ every time he got a strike!" Roger Sr. is survived by his son Roger Tirrell, Jr. and daughter-in-law Sarah (Phipps Tirrell), his daughter Bonnie Tapper and son-in-law Douglas (Tapper), stepson Steven Webber, his sister Marian (Terri) Eldridge, his five grandchildren, Jason Tirrell (Kim Tirrell), Wesley Tirrell, Blaire Tirrell-Smith (Corey Smith), Branden Tapper and step grandson Max Webber (Samatha Stephens-Webber) and his seven great grand children Skylier Tirrell, Sienna Tirrell, Elijah Tirrell, Chloe Dandrea, Sophia Sayette, Leo Sayette, and step great grandson Anton Webber. Roger is pre-deceased by wives Barbara E. Rutledge Tirrell and Margaret M. Foley Tirrell. A Memorial Gathering will be held Saturday, October 17, 2020 from 3-4:30 pm at Dangler Funeral Home, 600 Speedwell Avenue, Morris Plains. A Memorial Service will follow, beginning at 4:30 pm. If you would like to watch the Service virtually via Zoom, please email the funeral home for login information at danglerfuneralhomes@gmail.com In lieu of flowers donations are being accepted in the memory of Roger M. Tirrell, Sr. to the Brightening Veterans Lives, (BVL Fund Inc.). To access the BVL donation page type the following URL in the Search bar https://greatnonprofits.org/org/bvl-fund-inc and click the blue ‘DONATE’ radio button to contribute.