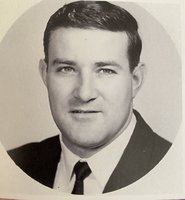 Thomas Burke, of Morristown, NJ, passed away on February 17 at the age of 86. A native of Kells, County Meath, Ireland, Thomas immigrated to the United States with his wife, Teresa in 1962. Thomas and Teresa – married for 58 years – lived in Morristown since 1965. Prior to arriving in this country, Thomas served as a merchant seaman and was blessed to have visited countries all over the world. Whilst traveling the high seas, Thomas met his dearly beloved, Teresa, and they spent many years in exotic ports of call generally seeing the world. Upon arriving in the United States, Thomas developed a successful career in the steel and metals industry. Working his way up from a day laborer, Thomas ultimately held senior general management positions with large metal works companies. Family and faith were the two guiding principles of Thomas' life. A long term member of St. Virgil's church in Morris Plains, Thomas was an active participant and supporter of the St. Virgil's community. Thomas and Teresa worked tirelessly to provide the best for their five children. In the early years, in response to his belief in the importance of a sound, christian education, Thomas worked two and sometimes three jobs so as to send his children to St. Virgil’s grammar school and Bayley Ellard High School. While Thomas did not graduate high school, he helped all his children graduate college and obtain post graduate degrees. Fiercely proud of his Irish heritage, Thomas remained an active supporter of Ireland and its people – having spent his youth both in the republic and the north of Ireland. That pride extended to his extended family, Thomas had strong life long relationships with his six siblings, numerous aunts and uncles and dozens of nieces and nephews. Although deeply saddened by their loss, Teresa and children- Derek Burke (Anne), Linda Esposito (Joe), Diane Swecker (Ron), Elaine Burke and Michael Burke (Traci) and Thomas’ 10 grandchildren- Deirdre Esposito, Philip Jude (PJ) Esposito, Thomas Burke, Kevin Swecker, Joseph Esposito, Stephen Burke, John Swecker, Sophia Burke, Kelly Swecker and Liam Burke are consoled with the knowledge that their husband, father and grandfather have joined other loved ones in heaven. A visitation will be held on Thursday, Feb 25, 6-8 pm at Danglers Funeral Home, 600 Speedwell Ave., Morris Plains. In order to adhere to CDC Guidelines and maintain a safe number of people in the funeral home, we respectfully ask that after paying your respects you give others the same opportunity by making your visit brief. The Funeral Mass will be held on Friday, Feb 26, 10 am at St. Virgil’s Church, 250 Speedwell Ave, Morris Plains. In lieu of flowers, donations in Thomas' name may be made to St. Jude Children's Research Hospital.