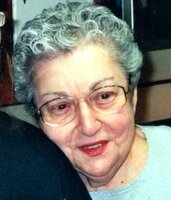 Julia Pagan (Licciardo) passed away on Nov. 16 in West Orange. Born in 1928, Julia was the only daughter of Giovanni “John” Licciardo, who emigrated from Salina, Italy, and Angelina Licciardo (Taranto). She grew up in Lodi. Her younger brother, Bartolo “Sonny,” passed away as a youth after a progressive debilitating illness. Julia graduated from Lodi High School and was accepted to Barnard College, but instead went to secretarial school. She was proud of her organizational skills and worked at various companies in New York City and New Jersey. At her tenth high school reunion, she became reacquainted with classmate Alfred R. Pagan of Little Ferry, and the two were married in 1958. The couple moved to the Township of Washington, Bergen County, in 1961, where they raised three children, Elizabeth, Michael, and Steven. When Alfred hung up his shingle as a consulting hydrological engineer, Julia became his de facto office manager, typing reports and handling all the financial details for the business and the household. She ran a tight ship. The family spent summers at Julia’s parents’ retirement home in Bradley Beach, where she would "kibbitz" with friends under an umbrella — always with a book on her lap — while the children frolicked in the Atlantic. Julia was a talented seamstress and enjoyed needlework. Her children benefited from her skills with most excellent Halloween costumes. Later, she took up quilting. She was also very fond of shopping. Julia sang soprano in the St. Joseph’s RC Church choir in Lodi for more than 40 years, and performed as organist/soloist for funerals. She was an avid reader. After the nest was empty, she volunteered for many years at the Township of Washington Public Library. The Pagans downsized to a condo in Hackensack in 2000, and enjoyed traveling with friends. Julia was overjoyed to welcome grandchildren Angela in 1996, Audrey in 2004, and Alexander in 2016. Julia and Alfred moved to the Green Hill Senior Living Facility in West Orange in 2016. He died in 2019 from complications of vascular dementia. The family would like to thank the staff of Green Hill for their care and compassion during Julia's final years. Julia Pagan is survived by Elizabeth and her husband, David Kleiner, Michael and wife Theresa (Treadwell) and Steven and wife Patricia Flaherty, as well as three grandchildren. She also leaves step-grandchildren Joshua and Leah Kleiner, and her lifelong friend Margaret Miller (Della Penta). Visitation will be on Sunday, November 21, 2021 from 2-4pm, with a Celebration of Life at 4pm, at Dangler Funeral Home, 600 Speedwell Avenue, Morris Plains. (*Guests are respectfully requested to wear masks while indoors.) Interment will be private. In lieu of flowers, the family would encourage donations to the charity of their choice.