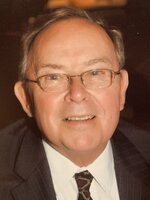 Richard O. Taubald, (Rich) 83 Beloved husband, father, and son Richard passed away peacefully on December 18, after a 10 year battle with Multiple Myeloma surrounded by people who loved him dearly. Richard was born in West New York, New Jersey to Erna and Otto Taubald on November 7, 1938. He attended Memorial High School and then went on to Hope College, in Holland, Michigan graduating in 1961 with a BA degree. After college he enlisted in the US Army serving his country for two years at Ft. Dix, New Jersey. After the Army, Richard continued his education at Montclair State University receiving a master’s degree in guidance and counseling. He then took a position at Montclair State University as Director of Men’s Housing where he met his future wife Doris who was Director of Women’s Housing. In 1970 he went to the University of Maryland to further pursue his education receiving a PhD in International Education 1974. He returned to Montclair University in 1974 working as Director of Continuing Education and later Gifted and Talented Education retiring in 2004 after 34 years. Rich will always be remembered for his love of Lake Iliff in Andover, NJ where he spent his summers as a kid and teenager. He made lifelong friends there that enriched his life in so many ways. Rich had a love of life that was contagious, he was kind, smart, generous, personable, always had a smile, had a great sense of humor, and always an optimist. He loved being outside, biking, skiing, swimming, golfing, kayaking, sailing and traveling. Kris and Kirsten and many of their friends remember him telling them that “Opportunity is Knocking.” Rich is survived by his wife, Doris, son Kristopher and wife Susan of Morris Plains, NJ, daughter Kirsten and husband Jon of Morris Plains, NJ and grandchildren Jack 13, Will 9, Charlie 7 and Henry 5. Because of the current pandemic a private church service is being held for Richard. A celebration of life luncheon will be held in the spring for friends and family. Donations in memory of Rich’s life may be made to Multiple Myeloma Research Foundation (MMRF), P.O. Box 414238 Boston, MA 02241-4238 (203) 229-0464 option 3 OR: www.themmrf.org