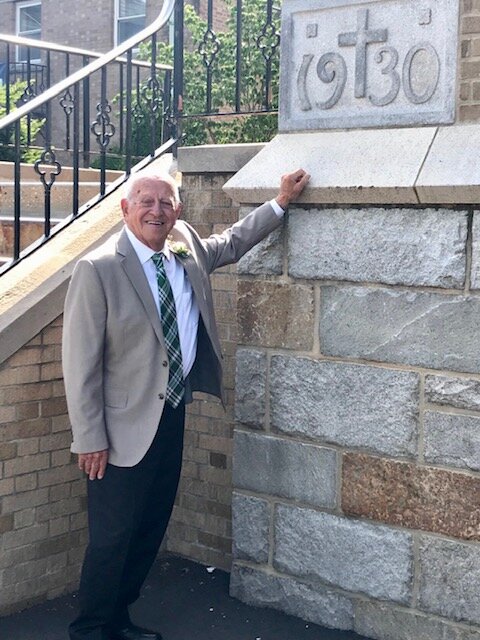 Please share a memory of Paul to include in a keepsake book for family and friends.
View Tribute Book

Paul V. Sambrowski, 92, of Morris Plains, passed away peacefully on May 1, 2022, surrounded by his loving family. He was born on April 10, 1930 in Wilkes Barre, PA to Jacob and Mary Sambrowski, the youngest of seven children.  His family moved to Belleville, NJ, during World War II. He joined the United States Air Force and was stationed in Germany during the Berlin Airlift. While serving in the National Guard’s 50th Armored Division, he met his wife, Joan McDonnell, at the Sussex Avenue Armory in Newark, NJ. They married in 1955 and lived in Newark until moving to Morris Plains in 1961. After working at the Afton Restaurant in Florham Park, he then worked for the United States Post Office. In 1968, he bought a luncheonette in Morris Plains and named it “Paul’s Place”. He owned it for ten years and worked hard to support his large family. He sold the store in 1978, returned to the US Postal Service and happily retired in 1996. Paul and Joan raised 8 children in their home on Hillview Avenue – seven girls and one boy.

Paul was a long-time member of St. Virgil’s Church, Prime Time Seniors and Morris Plains Senior Club. He was a former member of the Knights of Columbus and volunteered with the Community Soup Kitchen, Homeless Solutions and Operation Appalachia and supported numerous other charitable organizations.

Paul will be fondly remembered for his love of baseball (often watched without sound), especially his beloved St. Louis Cardinals. He enjoyed a good Manhattan. He enjoyed rooting against all New York sports teams, however he frequently took his children to games at Yankee and Shea Stadiums (but never past the 7th inning – traffic!). Paul had a great sense of humor and didn’t seem to mind being the butt of a good joke. He had a heartwarming smile that lit up a room.

Family and friends are welcome to gather on Tuesday, May 3, 2022 from 2-4pm & 6-8pm at Dangler Funeral Home, 600 Speedwell Avenue, Morris Plains. A Funeral Mass for Paul will be held on Wednesday, May 4, 2022 at 10:00am at St. Virgil's Church, 250 Speedwell Avenue, Morris Plains. Interment will follow at Holy Rood Cemetery, Morris Township. In lieu of flowers, Paul’s family asks for donations to the Interfaith Food Pantry Network or the Morris Minute Men.