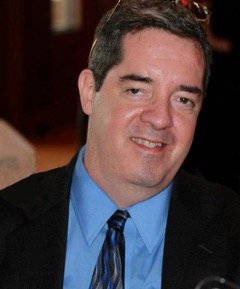 Born in Denville, Michael resided in Rockaway before moving to Morris Plains 25 years ago.

Michael graduated from Morris Knolls High School in 1981. He proudly served his country in the U.S. Air Force during Peace time.

Michael worked as an IT Manager for FIS for 33 years. Michael was also a member of the Cedar Grove Elks Lodge 2237. In his spare time, Michael enjoyed reading, watching soccer, listening to music, travelling, and playing with his dog, Jake. He also had a talent for singing and playing the keyboards, and was a member of a band for many years.

A Celebration of Life for Michael open to all his friends and family will be held on Saturday, December 14, 2019 from 11:00am-4:00pm at the Lake Parsippany Clubhouse, 701 Lakeshore Drive, Parsippany. Interment of ashes for the immediate family only will take place at Restland Memorial Park on December 14, 2019 at 9:30 a.m.

In lieu of flowers, the family kindly requests donations in his memory be made to his GoFundMe page entitled “In memory of Michael Begley”.  Arrangements were under the care of Dangler Funeral Home, Morris Plains.

Share Your Memory of
Michael
Upload Your Memory View All Memories
Be the first to upload a memory!