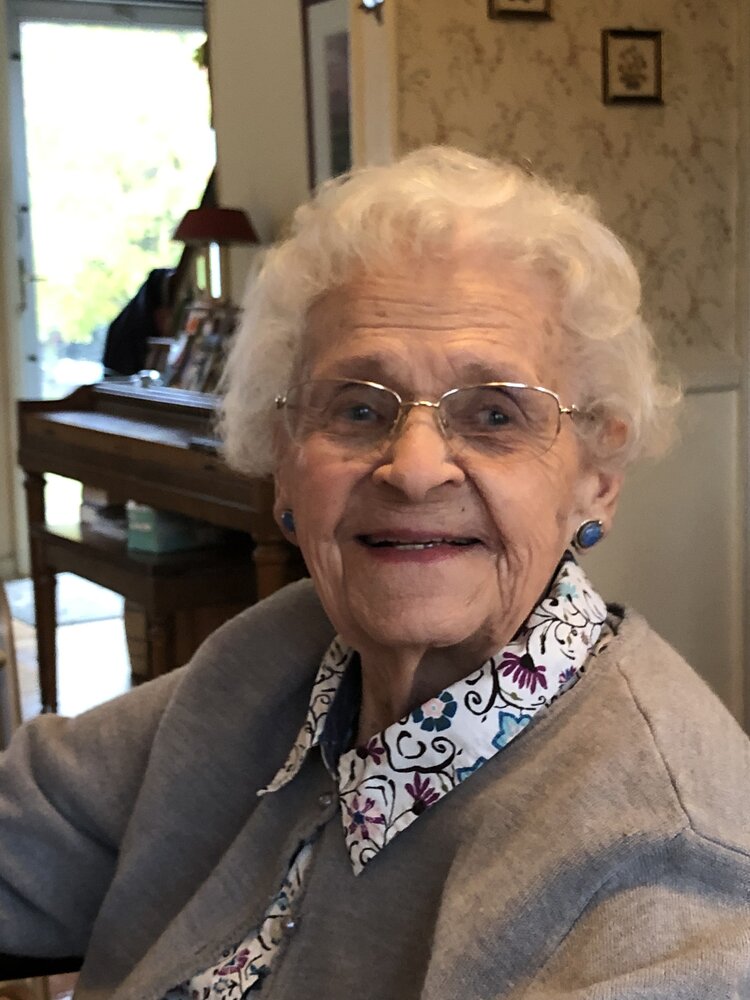 Please share a memory of Florence to include in a keepsake book for family and friends.
View Tribute Book

﻿﻿﻿MORRISTOWN  -  Florence F. Luckey passed away peacefully the afternoon of Thursday, March 10,2022 with the love of her family surrounding her.  She was one month shy of her 101st birthday.  Florence was a beloved wife, mother, grandmother, great-grandmother, aunt, neighbor and friend.

Florence was the daughter of Stanley and Mary (Marek) Jadez.  She was born in Bronx, NY on April 8,1921 and raised in Ozone Park, NY spending her summers with her extended family in Jessup, Pa. She was a graduate of Richmond Hill high school and Brown’s Business School.

In 1939 the “City” Girl on a blind date at the NY Worlds Fair met the “Country” Boy Jack Luckey of Morristown, NJ.  After a four year courtship interrupted by WW II they were married on June 20, 1943 in Riverside, California.  They returned to Morristown and moved to Morris Plains in 1952 where she still lived until the time of her passing. She was the matriarch of the Burch Drive neighborhood.

Florence was a veracious reader and on a regular basis take her “bag of books” to and from the Morris Plains Public Library. She always had a pen and notepaper at her side. She would write both notes and long letters to family members and a network of friends scattered throughout the USA. Often a birthday card (with a note) would contain a $2.00 bill. She would spend hours writing her Christmas cards including a personal note updating you on the events going on in both her and Jack’s lives.

Florence was a 70 year parishioner of St Virgil Church in Morris Plains,NJ. In her earlier years she was an active member of the Rosary Society and many other parish activities.

Florence never got her drivers license until she was in her mid forties. From that point forward she put the pedal to the road. She and and her next door neighbor and traveling companion Evelyn Rizzo would go to shops, malls and antique stores throughout Northern NJ.  Together they navigated every back road between home and their destination avoiding highways at all costs. When it came to traveling she and Jack were always up for an adventure. Always traveling by car they saw most of the 50 states visiting one small town after another on their cross country trips. As expected, family members would receive a postcard or note telling of some happening on their trip.

Florence was blessed with a loving son Glenn Michael. As her primary care giver for over 20 years he gave to her and her husband Jack all the love and support needed to remain in their home they both lived countless special memories.

Florence was predeceased by her parents Stanley and Mary Jadez, her sister, Mary Victoria (VJ) Jadez, her sister-in-laws and brother-in-laws, Gwen & Jack Dormer and Jane & Leo Halko,  and her “Angel” daughter, Nancy Luckey. She is survived by her devoted husband of 78 years, Jack. She leaves behind many people who love her dearly; including her four children and their spouses, John D.(Jack) & Lenore Luckey, of Madison,NJ, Glenn M. Luckey of Morris Plains,NJ, Lynn A. & Van Allen of Duluth,Mn. and Valerie V. Luckey & Henry Holdsworth of Wilson, Wy.; her grandchildren and their spouses, Ryan & Tracy Luckey, of Coppell,Tx, Meghan & Bill Houston, of Morris Plains, NJ, Sean Luckey, of Jersey City,NJ, Tory & Ben Clarke, of Centennial,Co. and Avery Holdsworth, of Wilson,Wy.; her cherished great-grandchildren, Mark Luckey, Liam & Emily Houston and Whitaker & Yardley Clarke, her niece and nephew, and many dear friends.

Florence had a full life and remained young at heart until the end. She modeled how to live a long and full life, meeting its challenges with strength and determination while remaining upbeat and optimistic. Her family and friends will miss her deeply. We can honor her by looking into the night sky, pick out a star and follow her on the last leg of her life’s journey to heaven.

To honor her wishes there will be no wake. A memorial mass celebrating her life will be held at a later date.  Donations can be made in Florence’s memory to the Morris Plains Public Library, 70 Glenbrook Road, Morris Plains, NJ. 07950

Arrangement are under the care of Dangler Funeral Home, Morris Plains.

Share Your Memory of
Florence
Upload Your Memory View All Memories
Be the first to upload a memory!
Share A Memory