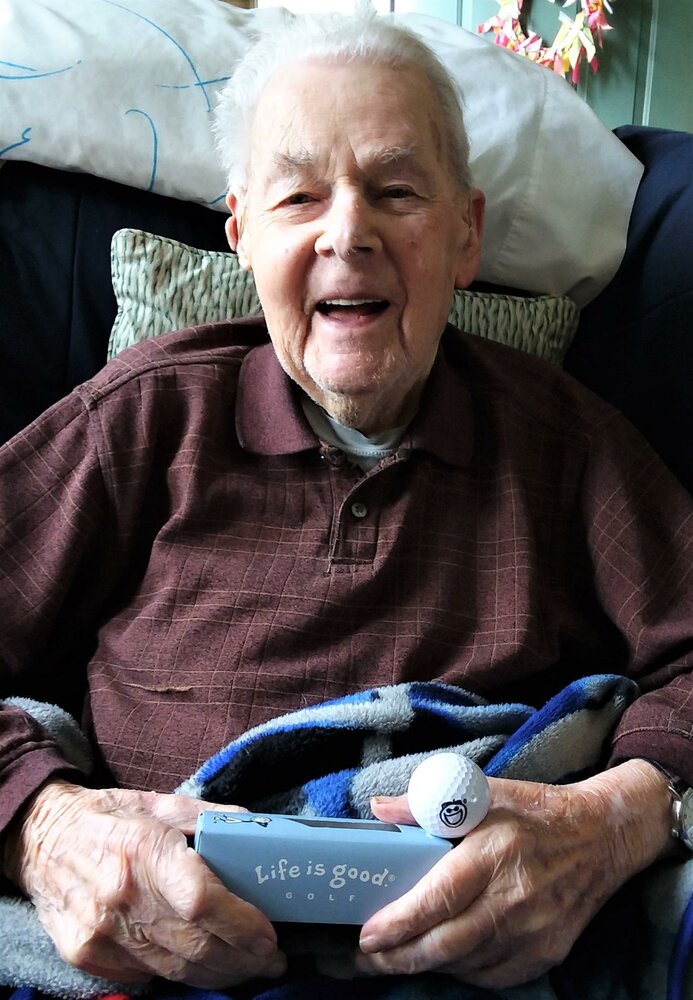 Please share a memory of John to include in a keepsake book for family and friends.
View Tribute Book

MORRIS PLAINS - On Saturday, March 26, 2022 John Joseph Luckey passed away at home, surrounded by his family at the age of 103.  Jack was a devoted and loving husband, a caring and supportive father, grandfather, great-grandfather & uncle, faithful friend, neighbor and colleague. The three loves of his life were God, family, and country.

Jack was the eldest son of George and Elizabeth (Hillock) Luckey.  He was born on May 28, 1918 at Dr. Mills Hospital, 36 Maple Avenue, Morristown, NJ.  He was a graduate of Morristown High School class of 1936 and a member of the varsity basketball team. He told many stories of team travels. In particular, the long bus ride to an away game played at the Asbury Park Convention Center. Upon graduation he went to work at Chemical Bank, NYC while attending the American Institute of Banking.

In 1939 on a blind date at the New York Worlds Fair he met the love of his life, Florence Jadez. They were married on June 20, 1943 in Riverside, CA while he was stationed at nearby US Military Camp Haan.

Prior to his marriage and the outbreak of WW II Jack enlisted in the US Army in July 1941.  He attained the rank of Staff Sargent and served in both the Pacific and European theaters. He was honorably discharged in December 1945 and returned to Morristown.

In 1951 he and Florence moved to Morris Plains and built a life together raising their family of four children. He was an active parishioner of St. Virgil’s RC Church and a charter member of Bishop McDowell Council Knights of Columbus.

Jack was employed by Suburban Propane Gas for 38 years as a salesman in the Bound Brook office and later as regional sales manager for the NY, NJ, PA, and Western Massachusetts territory. His “red and yellow” company car was a familiar sight for many years in and around Morris Plains and throughout Somerset, Warren, and Hunterdon counties.

Jack was a lifelong Yankee fan and avid golfer. In retirement he was often a “walk on” at Pinch Brook Golf Course. He had his only hole-in-one while playing a “solo” round of golf. In later years, anyone visiting his home would find him sitting in his chair watching a Yankee baseball game, a round of golf, a Giant’s football game or a Rutgers basketball game.

Jack would share stories of many memories he had of his earlier years. He would say “Do you remember”…

Horn & Hardart Automat?  He did.

The NY Giants playing home games at Yankee stadium? He did.

Jack and Florence were blessed with a loving son Glenn who was their primary care giver for over 20 years. His love and support enabled them to remain in their home where they lived countless special memories.

We can best honor him by looking into the night sky, find the star you chose for his wife Florence and follow them both together on the last leg of their life’s journey to heaven.

To honor his wishes there will be no wake. A memorial mass celebrating both their lives will be held at a later date.

Charitable contributions in Jack’s memory may be made to St. Jude’s Children’s Research Hospital, 501 St. Jude Place, Memphis,TN 38105-9959, or online at www.stjude.org

Arrangements are under the care of Dangler Funeral Home, Morris Plains

Share Your Memory of
John
Upload Your Memory View All Memories
Be the first to upload a memory!
Share A Memory