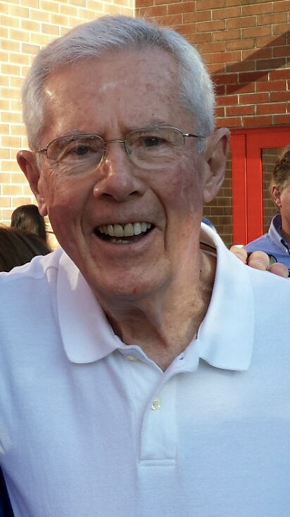 Michael J. Moran, 84, of Morris Plains, NJ, died at home after a long and courageous battle with Parkinson’s Disease.  Born in Bridgeport, CT, Michael graduated from Bassick High School in 1954 and from Fairfield University in 1958.

Michael was a natural born Salesman, in the truest sense of the word.  He retired from Carlson Marketing Group in 1993.  He traveled extensively with this wife of more than 30 years, Reine.  He enjoyed playing tennis, a good game of cards and spending time with his grandchildren.  Michael was an avid reader, a devoted Jeopardy fan and a naturally curious individual who loved meeting new people.

Michael was predeceased by his beloved son, David and his parents Michael and Joan Moran.  Survivors include his wife Reine Moran of Morris Plains, NJ, his brother Danny Moran, and sister-in-law Joan of Bridgeport, CT, his children Teresa Harris, son-in-law George of Fairfield, CT, Ericka Melton, son-in-law Barry of Milford, CT and five grandchildren, David, George Michael and Christopher Harris, Jonah and Anna Lee Melton, and other family members in the Philippines and Australia.

A Memorial Service will be held on Saturday, April 9th at 1:00pm at Assumption of the Blessed Virgin, 91 Maple Ave., Morristown, NJ.  The family has requested in lieu of flowers that contributions in his memory be sent to the Michael J. Fox Foundation at https://www.michaeljfox.org/donate .