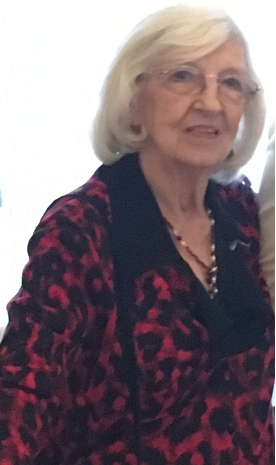 Obituary of Patricia A. Grochowski

Please share a memory of Patricia to include in a keepsake book for family and friends.
View Tribute Book

Patricia was born in Gloucester, Massachusetts to Phoebe Thompson on January, 28, 1926. After graduating from Newark High School for the Arts in 1940, she worked in the textile industry as a fabric designer for the Dan River Company in New York.

She enjoyed living in Morris Plains in summer and fall, and in winter and spring, traveled to New Smyrna Beach, Florida with her husband, Gene. Together, they celebrated birthdays, holidays, weddings, and anniversaries with her children, grandchildren, and great grandchildren.

As a member of the choir of Morristown Women’s Club, she was involved with fundraising and bringing music to the local community during the holiday season. Her favorite hobbies were oil painting and tea leaf reading.

Her ten great grandchildren include: Luke, Jackson, Harrison, Griffin, Stella, and Lincoln, living with granddaughter Nicole and Robbie Farmer in Edgewater, Florida. Evan ,Greyson, and Ava are the children of her grandson, Sean Jamer of Lake Hopatcong, New Jersey. Her great grandchild, Hendrick, is the son of Eric and Jana Bosse of Port Orange, Florida.

Patricia is preceded in death by her husband, Eugene Leon Grochowski, her mother, Phoebe Thompson McGrath, her daughter, Patricia Mary Bosse, and her brother, Harry MacDonald.

Share Your Memory of
Patricia
Upload Your Memory View All Memories
Be the first to upload a memory!
Share A Memory