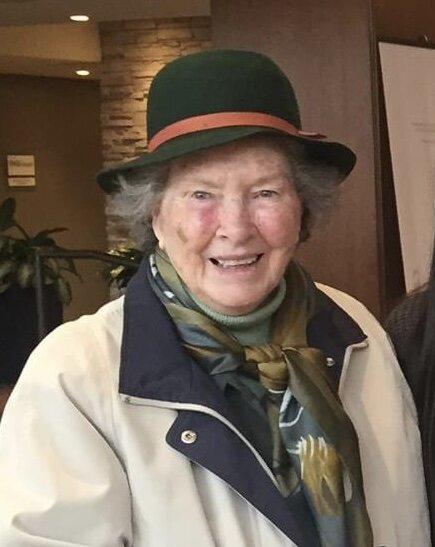 Please share a memory of Royce to include in a keepsake book for family and friends.
View Tribute Book

Born on January 27, 1923, and raised in the Shenandoah Valley of Virginia (Alberene), Royce graduated from Lane High School in Charlottesville and attended one year of business school. She met Preston Pope Lee while he was attending the University of Virginia and they married on March 1, 1944.

In 1947 Royce and Preston moved to Madison, New Jersey where they raised their two daughters.  In addition to being a homemaker, Royce was active in numerous local civic organizations including the American Red Cross, the Thursday Morning Club, the Friends of Madison Library and the Friends of Frelinghuysen Arboretum of which she was president for several years.  She also spent many years playing tennis and paddle tennis at Noe Pond Club.

In the late 50’s and early 60’s the family lived in Mexico and Australia while Preston was assigned there on business.  Thus began her lifelong love of travel to places both near and far.

An avid gardener and talented flower arranger, Royce was a member of The Home Garden Club of Morristown and, after they moved to Chatham Township, New Jersey in 1975, she was a patron of the Library of the Chathams where for many years her arrangements adorned the front desk.

Royce was a talented cook who enjoyed sharing meals and recipes with friends and family. Her contributions to the annual family Thanksgiving dinner will be greatly missed.

In addition to her husband of 79 years, Royce is survived by her two daughters Susan Hunt Lee and her spouse, Fay E. Melendy of Silver Lake, NH; Carter Ridgely Lee and her spouse, Peter L. Maas of Madison, New Jersey; and two granddaughters, Emilee Grace Maas and Caroline Tao Maas of Madison, New Jersey. She was predeceased by her parents, Grace Hunt Eubank (Cody Bryan Eubank), and Roy Carter Pace.

The family will share a private celebration of Royce’s life. In lieu of flowers, donations in Royce’s name may be made to Library of the Chathams, 214 Main St., Chatham, NJ 07928.

Share Your Memory of
Royce
Upload Your Memory View All Memories
Be the first to upload a memory!
Share A Memory