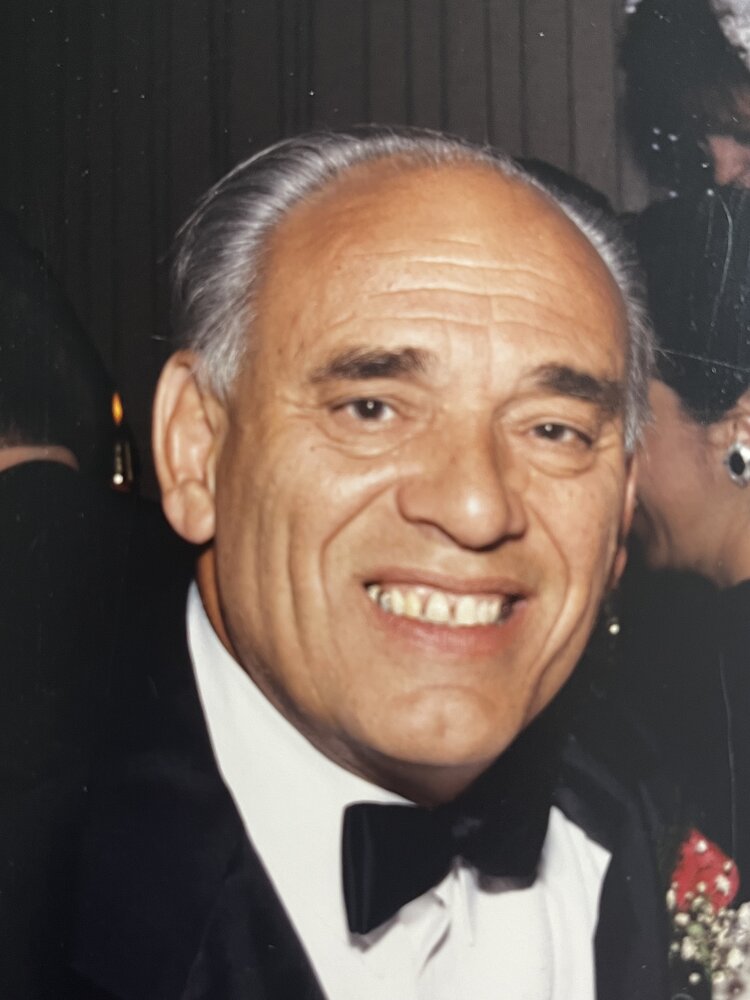 Please share a memory of Evangelos to include in a keepsake book for family and friends.
View Tribute Book

Evangelos James Stavrakas died at age 96 in Morris Plains, NJ on 10/25/2022.  Known as “Lucky” (Grandpa & Uncle) to family and close friends and “Jim” to neighbors and his JCPenney colleagues, he lived the American dream to the fullest.  Born in Brooklyn, NY to Greek immigrant parents, educated in NYC public schools and as a WW II Army (non-combat) veteran, the GI Bill gave him the opportunity to graduate with a Master’s Degree from Lowell Technological Institute.  During college, Lucky enjoyed playing football and ballroom dancing.  He met his wife of 67 years, Dolores (“Dee”) Freitas, dancing at the Commodore Ballroom in Lowell, MA.  Married in 1951, Jim and Dee had five children, which they raised in Foxboro, MA, Upper Montclair, NJ and Chatham Township, NJ.

Although raised Greek Orthodox, Lucky converted to Catholicism in his early twenties.  He shared his deep love for Jesus and the Catholic Church with his family.  He taught catechism in Montclair and was an active member of Corpus Christi Parish in Chatham—most especially singing in the choir.

Jim was Director of Quality Assurance for the JCPenney Company until his retirement in 1986.  Under his leadership, QA standards set at Penneys became standards for the entire industry.  He was Chairman of the AATCC, author of scientific papers, and an expert in the field of permanent press.  Often invited to be a guest speaker for various textile associations, Jim enjoyed speaking to audiences where his technical knowledge, innate intelligence, and great sense of humor were well known.  In 1981, Jim was honored with a humanitarian Lifetime Achievement Award by the Cooley’s Anemia Foundation.

During his 36 years of retirement, Lucky enjoyed with his wife playing tennis, bridge, golf, travel, volunteering, reading, socializing, and spending time with his twelve grandchildren, each of whom knew that Grandpa never turned down a dessert/snack or a chance to hug them.  He also loved listening to classical music, operas, and Broadway musicals.  His family vacations to Harvey Cedars (LBI) were some of his favorite memories as well as the time Dee and he spent as snowbirds in Naples, FL.

Predeceased by Dolores and his daughter Regina, Lucky leaves behind his children:  MaryAnn (Steve) Coravos, Christine (Jack) O’Marra, Beverly (Bill) Conboy, and Jim (Karen) Stavrakas as well as all his precious grandchildren—Stacey, Christopher, Michael, Meredith, John, Bill, Liz, MaryKate, Dan, Kevin, Ryan and Jake in addition to his 11 great-grandchildren, son-in-law Joe Winter and his only brother, Robert Stavrakas, and his many nieces and nephews.  God bless, Dad.

Share Your Memory of
Evangelos
Upload Your Memory View All Memories
Be the first to upload a memory!
Share A Memory