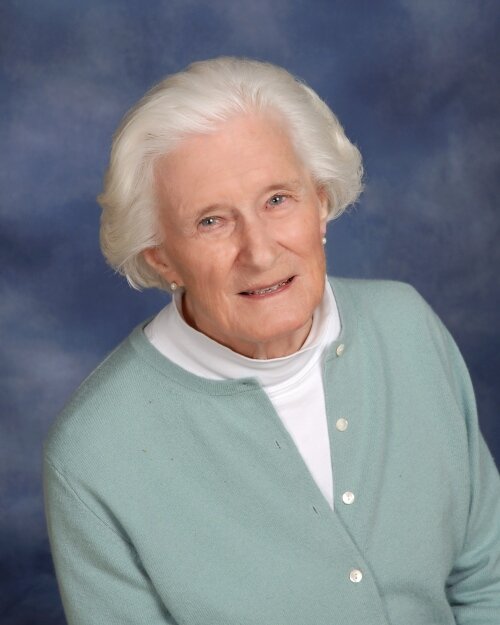 Please share a memory of Rachel to include in a keepsake book for family and friends.
View Tribute Book

Rachel Gallup Stavrolakis, 94, of Colfax, NC, formerly of Atlanta, GA, died peacefully on November 16, 2022 after a two year period of declining health due to complications of a fall. She died eighteen days before her 95th birthday. Born in Morris Plains, NJ, on December 4, 1927, she was the only child of Walter Alva Gallup and Ruth Elinor Beers Gallup. She attended local schools in Morris Plains where her mother’s Beers family had lived for many generations. She graduated from Simmons College in Boston with a B.S. in Library Science in 1949. She was a lover of books and worked as a librarian both early in her career and later after her youngest child was in school. Both her mother and great aunt were librarians, and she was proud to carry on the tradition, and instilled a love of reading in her own children.

After marrying in 1951, and having five children while living in various cities following her husband’s corporate career, the family settled in Atlanta, GA in 1971, where she would spend the next fifty-two years. In 2013, she relocated to a retirement community in North Carolina to be closer to family.

A devoted mother, she made time for each of her children, encouraged their activities, and managed to prepare dinner with a homemade dessert nearly every night. After her youngest child was in school she decided to return to her career as a librarian only to discover that by the 1970’s, a Bachelor’s degree was no longer enough to be a professional librarian. By then a Master’s degree was required. Undeterred, she went back to school and earned a Master’s degree from Georgia State University in Library Media in 1975. This was followed by a second Master’s degree in 1984 as a Specialist in Education. Armed with these credentials, she was the librarian for Marietta High School for twenty-one years, retiring in 1995. During these years, she moved from the family home in Buckhead to a smaller house in Marietta as her children grew up and left home. During this time, she also volunteered in Marietta at the William Root House Museum, another of her interests. After retirement, she relocated one last time in Atlanta to a condominium in Decatur where she served as the Treasurer of the condo association. During her retirement years, she enjoyed golf and travel, especially traveling to Europe multiple times as well as to see her far flung children and grandchildren, often sharing vacations with them. She was an avid needle pointer, loved the beach, and was a long time member of Cherokee Town and Country Club in Atlanta where she enjoyed the pool and golf. After moving to her retirement community, River Landing in Colfax, NC, she slowed down but made new friends and continued to play golf there until she was nearly ninety.

She was a devoted “Grammie” to her many grandchildren remembering their birthdays with books and other treats, and patiently reading and answering their questions when they were together. Her adult children loved spending time with her as well, and she always made their favorite meals whenever they visited. Her home, wherever it was, was always a place to relax and rejuvenate.

A Funeral Service for Rachel will be held on Saturday, December 3, 2022 at 9:30am at Dangler Funeral Home, 600 Speedwell Avenue, Morris Plains. Interment will follow at Evergreen Cemetery, Morristown.

In lieu of flowers, the family requests that a donation be made to the Hospice of the Piedmont, High Point, NC, Simmons University School of Library & Information Science, or to the charity of your choice.

Share Your Memory of
Rachel
Upload Your Memory View All Memories
Be the first to upload a memory!
Share A Memory