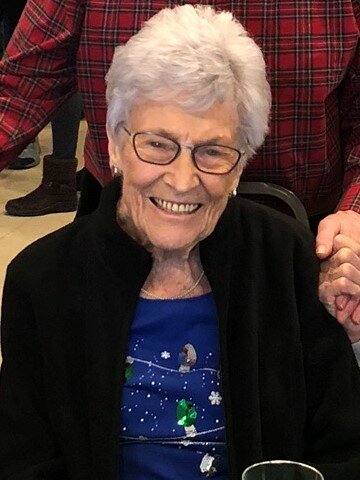 Please share a memory of Kathryn to include in a keepsake book for family and friends.
View Tribute Book

Kathryn E. Quinn (nee Carpenter) was taken into God’s hands at the age of 91 on December 31, 2022. She was delivered by God on May 3, 1931, in Hackensack, New Jersey, the fourth of five children to Michael and Mary Carpenter. Kathryn’s love of family began at birth, as she had many wonderful aunts and uncles, most particularly Uncle Herbert Carpenter and Auntie Kathryn Reagan (nee Barnes). Kathryn’s parents had 31 grandchildren.  Kathryn was forever proud of being a “Carpenter” and loved her siblings.  Kathryn’s bond with her oldest sister Mary Eleanor (Aunt El) was everlasting, as they spent their adult lives as great friends and sisters in adjoining towns.  Kathryn loved being in the company of her oldest brother John and his wife Ruth, both of whom sadly passed earlier than was fair.  While Kathryn’s sister Patricia lived in San Diego with her military husband George and their 11 children, both families made many cross country trips to see the other. Kathryn would marvel at the energy and fortitude of her younger brother Michael and his wife Carolyn who remained in New Jersey and became advocates for mentally challenged families.

Kathryn attended Holy Trinity High School, graduating in 1949. While there her older sister Mary fixed her up on a blind date with the second oldest boy in the house where Mary and her husband Pep Saul rented a room. On this blind date, Kathryn met her husband, Ben Quinn and they began a life together for over 70 years.

Kathryn worked in New York City while her soon to be husband attended Seton Hall University and Seton Hall Law School. They married in 1954. A few years later, Kathryn & Ben purchased their first home in Florham Park with sons Thomas and Robert and daughter Kathleen.  In July 1964, while pregnant with twins Paul and Stephen, Kathryn and Ben moved into their forever home at 142 Briarwood Rd.  There, they would remain for over the next 58 years raising their children and forging close friendships with their many great neighbors.

Kathryn was an excellent cook and did the household chores necessary to make the house a “home.”  The verb “pivot” became part of American culture with the pandemic, but Kathryn was “pivoting” decades before.  Her children’s friends loved a Quinn dinner invitation at a moment’s notice.  More importantly, family friends like John Keane, Paul McElgunn or Bob Garrity (BG) often came over to see Ben for a beer or 3 around the dinner hour.  It was either “pivot” or perish, so Kathryn pivoted.

Kathryn also learned that all work and no fun was not good for her or Ben. It was not unusual for Ben and Kathryn to be out on Saturday night, with Ben coming home earlier and Mr. Keane driving Kathryn home much later!  Ben & Kathryn also took annual trips to the Robindale hotel in Ft. Lauderdale with family and friends, where they would see Julie Kurtz who became “Aunt Julie.”

Kathryn’s closest friendships, however, were formed with Ruth and Marie—better known as Aunt Ruthie and Aunt Marie—the wives of Ben’s grammar school friends Bob Garrity and Paul McElgunn.  To this day, it is a point of confusion for Kathryn’s grandchildren whether the Garritys and McElgunns are related to the Quinns or not!  The three couples were the best of friends for over six decades and created memories on family vacations and golf trips across the country, including one to Ireland. Their children became close friends who love to share the same funny stories time and time again and still laugh!  These stories were often shared at the McElgunn Fourth of July party, which Ben & Kathryn religiously attended for over 55 years.

As Ben became the Irish consiglieri to his many law firm clients/ friends such as Al Cocino, Jerry Mazzochi, and Jim Prisco.  Kathryn became friends with their wives, particularly Florence Cocino.  Kathryn also took up golf nearly two decades after Ben had joined Spring Brook CC in the 1960s.  The running joke was which parent played more lifetime rounds there. Kathryn certainly made up for lost time, playing as many rounds as she could at the club while forming many new friendships there.

While Kathryn knew how to have fun, she also understood that she had to teach by example to fulfill her role as a mother, aunt and respected friend.  She was Catholic with a capital C, and Ben and her helped form and found Holy Family Church.  Kathryn instilled in her children, their spouses, and her nieces and nephews the importance of family and treating people with kindness.  She was quick to write a thank you note or call to thank someone for a kind gesture.  She was a listener and advisor. While she and her sister El occasionally butted heads, they knew never to let indifferences fester and impede sisterly bonds. Kathryn became a de facto second mother to many of her nieces, particularly Joanne Carpenter.

Kathryn was most proud of her own children and grandchildren. She felt blessed to be a grandmother (and great grandmother!).  She would gush when her grandchildren would call or stop over on their own, and she bragged about each grandkids’ many accomplishments and talents to anyone who would listen. Kathryn was also effusive in her praise of her childrens’ in-law Kenny, Mary, Stacey, Paula, Lauren, and Jann.  To her own children, she was both someone you could get advice from and someone to aspire to be like.  She was tremendously proud to have twin sons!  Her sons Tommy and Bobby, will always remember her ability to smile as a loving mother, as it showed how proud she was of them and that they were forever protected by her love.

Kathryn and her only daughter, Kathleen shared a special bond.  Kathryn taught her the gift of perseverance by instilling in Kathleen the love of the NY Mets!  Far more importantly, she taught her the values of hard work, family, being a loving wife and mother, making friends and having fun.

While her husband Ben, always ranted about his saintliness when describing their 70+ years together, he knew in his heart it was the other way around.   She adored him and loved him and he gave the same in return.

Kathryn was predeceased by her sister Mary and her husband “Pep”, brother John Carpenter and his wife Ruth, brother-in-law George Lawler, brothers-in-law Frank and Joe Quinn and Frank’s wife Mary, sister-in-law Marie Garrity and her husband Leo, and granddaughter Mary Kathryn Quinn.  Kathryn is survived by her husband Ben, sister Patricia Lawler, brother Michael Carpenter and his wife Carolyn, and her sister-in-law Anita Quinn (Raker).  Additionally, she is survived by her 5 children and their spouses, 14 of her 15 grandchildren, and her great grandchild with another on the way.

The wake will be held on Friday January 6 at Burroughs, Kohr, & Dangler Funeral Home 106 Main St., Madison NJ from 4 pm to 8 pm.  The funeral mass will be held on Saturday January 7 at 9:30 a.m. at Holy Family Church, 1 Lloyd Ave., Florham Park N.J. The funeral mass on January 7 will be live streamed and can be viewed through Holy Family’s website: www.holyfamilyfp.org.

In lieu of flowers, please consider a donation to the Florham Park Memorial First Aid Squad, 60 Felch Rd., Florham Park NJ 07932.  Online donations can be made at http://www.fpfirstaid.org.

Online condolences can be made at www.danglerfuneralhomes.com.

Share Your Memory of
Kathryn
Upload Your Memory View All Memories
Be the first to upload a memory!
Share A Memory