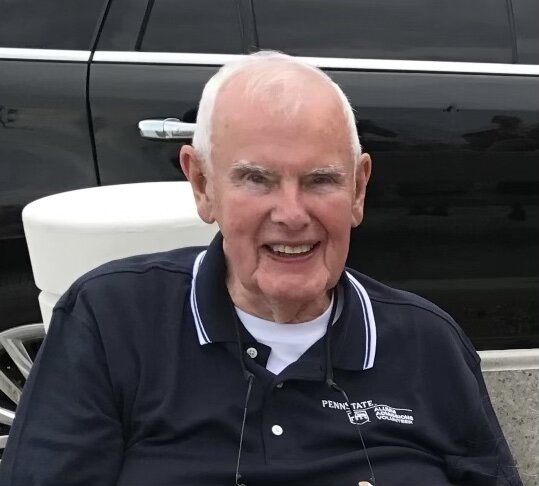 Get Directions
Monday
23
May

Get Directions
Monday
23
May

Please share a memory of Thomas to include in a keepsake book for family and friends.
View Tribute Book

Tom was born on August 2, 1932, in New York City, the son of Mary Josephine and Denis Walsh.  He was married to Mary Lou (deceased) for over 58 years, and they had 8 children and 15 grandchildren.

Growing up in Astoria Queens, Tom attended PS# 122 and later LaSalle Academy and he graduated from Manhattan College.  He and Mary Lou married in 1955 and traveled to Mt. Home Air Force Base in Idaho where Tom was on active duty until 1957.  The couple returned to the East Coast and Tom joined IBM.  He held various Sales & Marketing assignments over a 37-year career at IBM. Tom also completed his Masters of Business Administration from New York University.

Tom and Mary Lou lived in Madison for nearly 40 years.  He was an active parishioner at St. Vincent’s and Corpus Christi, a founding committee member for the Madison Community Pool and volunteer for Boy Scout Troop 7 and Hospice.  Tom will be remembered for his ability to connect with others, his strong Catholic faith and love of sports, reading and travel.

He was preceded in death by his wife, Mary Lou and son Eddie. He is survived by his brothers, Joe (Elsie), Frank (Marie) and his sister Mary (Nick, deceased).  He is preceded in death by his brother Mike, (Barbara, deceased) and his sister Evelyn (Jim).  He is survived by his children Tom (Marcia), Mary, Dennis, Patty (Sean deceased), Jeanne (Pat), Jackie (Mike) and Kathy (Steve) and by his fifteen grandchildren – Matt, Scott, Lindsay, Pat, Mary, Kaity, Liam, Tommy, Jack, Quinn, Rory, Caroline, Harrison, Riley and Brynn.

In lieu of flower contributions, donations can be made in Tom’s memory to La Salle Academy, 215 East  6th Street, New York, NY 10003.  www.lasalleacademy.org

Share Your Memory of
Thomas
Upload Your Memory View All Memories
Be the first to upload a memory!
Share A Memory